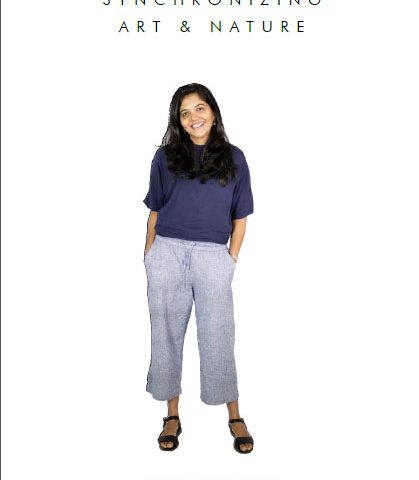 Humanity and nature are two mutually reflexive concepts sharing a deep biological and spiritual interconnection. Almost all intricate cycles and patterns embedded in human life are universal and they appear to have a striking congruence with the miscellany of mosaic geometric patterns observed in nature. Therefore, this basic natural connection becomes one of the rudimentary principles in the aesthetic discourse. ARTRA converses with artist, Dillai Joseph, whose work on canvas dexterously attempts to depict the complexity behind nature’s underlying designs and its deep impact on human beings. Dillai’s conception to depicting this complex yet soulful interaction between man and nature through her works of art includes resolution and awareness to the concerns of the environment. “Sometimes you have an idea and you are satisfied with it but there is no way to express it the way you want it. The concept is important. But to express it, you have to have the technical skill”. Dillai Joseph attempts to explore the concept of humanity under the light of nature.

Raised in a background of the science of biology and medicine, Dillai’s bias towards art has inevitably been inspired by bodily or biological reality of human beings and its deep attachment to nature. Dillai’s focus was on tracing the complex relationship between Science and Art, and her vision as an artist is largely influenced by Leonardo da Vinci. She graduated from ACBT completing her bachelor’s in Communication Design while her education of Fine Arts was substantially received through the private tutoring of Nadine David, a student of David Paynter, an artist whom Dillai was much inspired by. Later on, she joined the advertising industry which provided her a professional platform to display artistic interests, skills and knowledge.

With over 15 years of experience creating articulate works of art that depict humanity, nature and being, Dillai’s works have been displayed at renowned art festivals including Colomboscope and Galle Literary Festival. Her solo exhibition People, Puddles and Paradise (2018) explored the nuances of the environment, capturing distinct observations in her art. Conversing with ARTRA, Dillai candidly confessed that “The kind of exotic picture we put on display for the rest of the world is not the reality. The beautiful blue sea or the greenery is not the paradise for me”. Her work is pregnant with spontaneity and naturalness that the subject matter of her art usually becomes people, flora and fauna as observed in natural settings. She further stated that for her, inspiration could come from any random passenger on the streets, a beggar, a trishaw driver with strange hairstyles or even the messy polluted environs of Colombo suburbs embroiled in chaos and noise. Further commenting on the fascination in nature and her colourful visualization of it, she added, “Sometimes in my head I am trying to match the colours in my colour palette, “is the sky cobalt blue today?, Is the paddy field having chrome yellow or is it sap green?, Has it changed?” and then you suddenly you realize that every day it is different”. She also stated that Sri Lankan culture which is a rich and dynamic aesthetic site is not sufficiently being captured on canvas by many artists.

Contemplating on the function of art, Dillai comments that an artist must strive to awaken the conscience of people by providing them with critical insights through art. One of the recurrent motifs of her paintings is the concept of escapism in relation to the lives of women. Her art frequently features women in isolation with nature, celebrating freedom and individuality. Dillai emphasizes the immense power within nature to offer solace to human beings. Relating to her own experiences during stressful times, she claims that nature can be a passive and patient listener to human beings.

In her words, nature plays a significant role as a healer with a therapeutic charm bringing in balance, tranquility and peace to human life. Citing an example, she claims that the Kumbuk tree is a natural agent of purification reducing the toxicity in the environment while also cleansing the mental impurities of human beings. One of Dillai’s recent paintings portrayed an isolated couple under the shade of a massive tree, depicting an observation she made at the Viharamahadevi Park, “I wanted to portray how a tree becomes a passive partner who has witnessed it all and which was silently exploring that human relationship. It represents life form and it shows how trees make the environment conducive for expressing emotions”. According to her careful and attentive observation, she unravels a colourful universe. As we conversed on the esoteric quality and the attention to detail in Dillai’s work featuring trees she elucidated, “When exploring the different aspects, I saw that there is so much colour and another ecosystem inside. A realm less explored because nobody has time for it”. Conceptually, her art is charged with positivity and no dark side of it has been portrayed including scenes of chopping trees or gloomy landscapes. Dillai explains that it is a conscious choice to spread optimism and motivation to herself and the forth coming generations.

Her exhibition ‘Soulscape’ held in 2018 at the Lionel Wendt Art Gallery offers an artistic exploration of human soul betraying its innate crudity in love, passion, strength and individual freedom. This was followed by her art collection ‘Bodyscapes’ displayed at the Galle Art Trail in 2019 which celebrated the beauty and sensuality of the human body characterized by its angular and spatial dimensions under the play of light and shadow. Dillai has also curated a Collective exhibition at Colomboscope 2017 in collaboration with Charith de Silva and Meghan Dakshini.

Dillai was instrumental in organizing an art competition in the Matara district educating children on different themes such as coral reefs and human activity inspiring future generations to invest their energy and interest to find solutions for the issues of nature. Dillai was invited by the National Olympic Committee to do a painting on the theme of coral regeneration. Accordingly, her work ‘Giving the coral reef another chance’ 2019 was based on the divine concept of creation portraying a human hand giving life to the dying corals under sea. Through this symbolic piece of art, she attempts to convince the spectator that Humans can create.

Dillai comments that she always endeavours to fulfill her social service as an artist towards the society. She succinctly notes that although she is not an activist to bring revolutionary change on a larger dimension for environmental conversation, she is capable of advocating for it through her art. Conversing with ARTRA, Dillai acknowledges that her art attempts to discover, explore and accentuate different levels of beauty in things that we usually disregard. Dillai’s narrative in approaching the concept of environmental art intricately explores the nuances of nature’s beauty and potential for destruction while also illustrating it in her perspective through which ARTRA perceives the significance of the inherent relationship between art and environment. 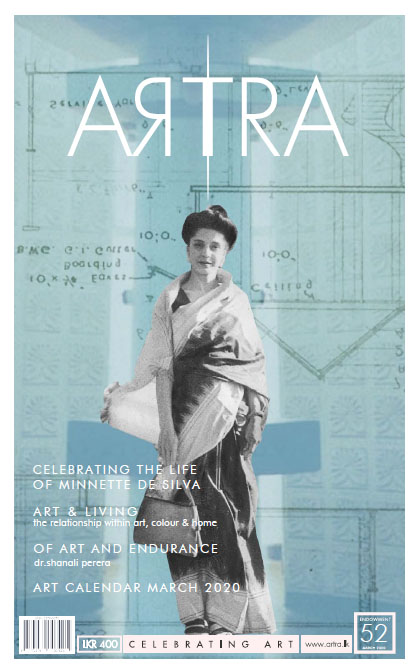 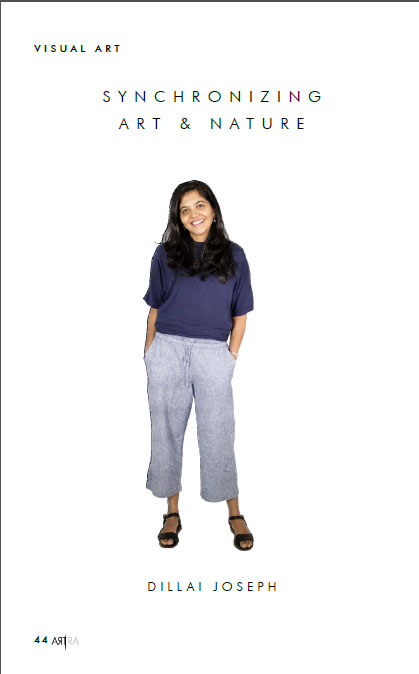 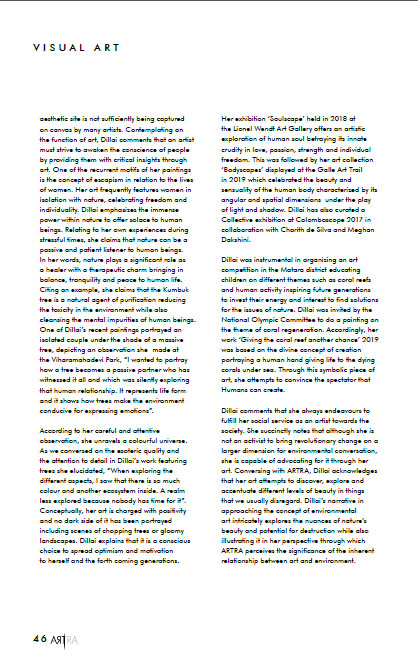 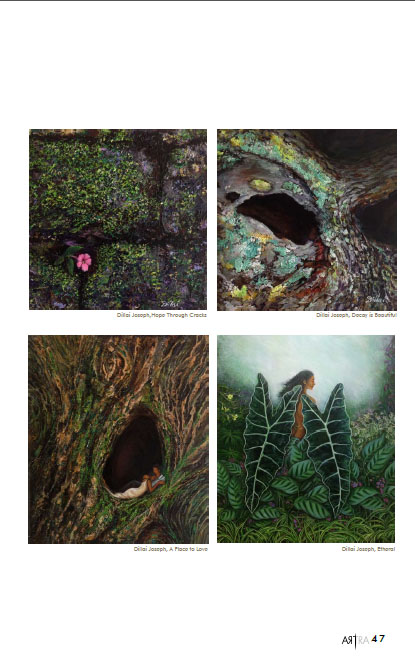